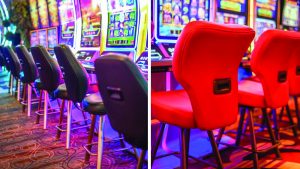 Gary Platt Manufacturing recently installed its casino seating at the Rainbow Club and at Emerald Island in Henderson, Nevada.

Brooks recently bought and extensively renovated both properties and turned to Gary Platt for seating solutions. “We chose Gary Platt because they’re a great company to work with, and their product is head and shoulders above the rest. Choosing Gary Platt is one of the best business decisions that we’ve ever made in our career,” he stated.

Gary Platt installed 300 units of its patented Monaco chair at the Rainbow Club and installed 300 GX2 chairs at Emerald Island. “The renaissance in downtown Henderson is bringing added excitement to the entire Las Vegas valley. Rainbow Club and Emerald Island casinos have been local favorites for years, and we are thrilled to be a major part of the renovation at both properties, bringing comfort and style to players,” said Gary Platt CEO Joe Esposito.

The Monaco and the GX2 model are two of dozens of Gary Platt models that are found throughout Henderson, the Las Vegas valley, and around the country, as operators like Tim choose Gary Platt chairs for their customers.

“I don’t even have to ask our players if they like the chairs. They tell me before I can even ask them how much they love the chairs and how comfortable they are,” Brooks added.