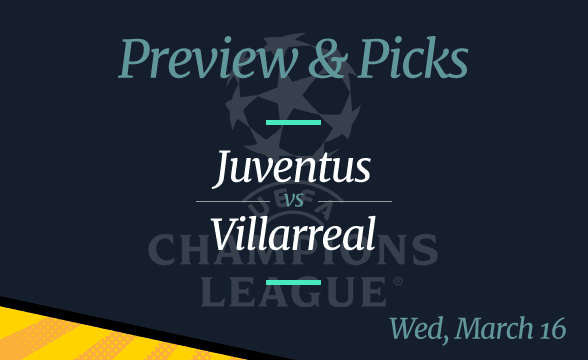 Juventus and Villarreal meet again three weeks after their first duel in the Champions League Round of 16. The first game was played in Spain and the teams drew 1-1. This Wednesday, they meet in Italy and oddsmakers expect the hosts to win.

It’s not going to be easy, though, as Juventus has some serious problems with injuries. On the bright side, the team’s been on a winning streak lately, despite missing as many as seven first-team players.

Since playing 1-1 with Villarreal, Juventus has entered a superb run with four straight wins. Three of those were in Serie A, while one happened in the Italian Cup. It sounds amazing, but there is a caveat – Juve played against much weaker opponents.

In the league games, Juventus defeated Empoli, Spezia, and Sampdoria, all of which are sitting in the bottom half of the Serie A table. In the Coppa Italia, Bianconeri defeated Fiorentina thanks to an own goal by Viola’s defender in the stoppage time.

That said, Juve’s run isn’t as impressive as it appears at first look. Add to that the fact that this team has at least seven injured players and you’ll realize that Wednesday’s game is likely to be difficult for the black-and-whites.

Can Villarreal Upset the Odds?

The Yellow Submarine loves playing on the continent. The evidence is that this team is the reigning champion of the UEFA Europa League. In the Champions League, the furthest they went was the semifinal in 2006. They would love to do so this year as well, but oddsmakers don’t seem to have much faith in them.

The main reason why Villarreal is seen as the underdog is its opponent is one of the world’s biggest soccer clubs. Another reason is that the game is played in Italy and Villarreal hasn’t been great on the road this season. In fact, this team 2-3 in away matches in 2022.

Same as Juventus, Villarreal also has some injury problems. However, they aren’t as serious as Juve’s. In fact, according to Villarreal’s boss Unai Emery, several of their key men could return for Wednesday’s game including Gerard Moreno, who is this team’s second-best scorer this season.

Juventus has player quality on its side, which should be the decisive factor in this game. Still, it’s almost certain Villarreal will give the Italians a run for their money. That said, we could see plenty of goals on Wednesdays on both ends.

Picks: Juventus to Win; Over 2.5 Goals