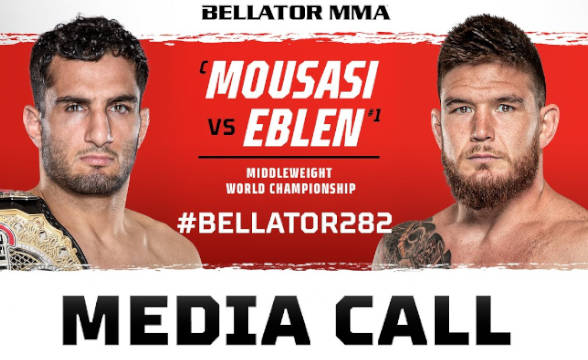 Forty-two days after the previous event, Bellator MMA is back. Mohegan Sun Arena in Uncasville, Connecticut is the place where Bellator 282 will take place on Friday, June 24, 2022. The headliner fight is Gegard Mousasi (c) vs. Johnny Eblen, in which the two battle for the Bellator Middleweight World Championship.

Defending champion Mousasi is favored to make his third title defense. To do that, he needs to inflict Johnny Eblen the first loss of his career. Heading into Bellator 282, Eblen is 11-0.

All odds are per FanDuel as of June 20.

Mousasi to Defend His Title Once Again?

With a 49-7 record, Gegard Mousasi is one of the best middleweight fighters of his generation. The Dutch fighter started his professional career in 2003, since which he’s fought in several promotions, including Cage Warriors, Pride, and even the UFC.

Then, in 2017, he decided to move from the UFC to Bellator MMA. Since then, he’s fought eight fights in this promotion, winning seven and losing just one. His only Bellator loss happened against Rafael Lovato Jr., which was the second time Mousasi was defending his Middleweight Championship belt.

Just two fights later, he got ahold of the tile once again. He did it by beating Douglas Lima by decision. And he’s been in the possession of the title ever since, defending it two times already, beating the challengers – John Salter and Austin Vanderford – both by technical knockout (punches).

Johnny Eblen started his professional career in 2017 in Shamrock FC. After four wins in the promotion, he inked a Bellator MMA deal. Since joining the promotion, he’s won seven fights, which is what gave him a chance to compete for the title.

Although he’s one of the best fighters in the division, he still hasn’t fought against such an elite fighter as Mousasi. This explains why Eblen’s odds are +205, making him an underdog in Saturday’s fight.

The Bellator 282 headliner is going to be a super-exciting fight. These two are among the best fighters in the entire promotion. They got the skills, as well as the motivation to do well on Saturday. Our pick is Mousasi, as he just has way more experience than his rival. Still, this isn’t going to be an easy fight for him. Instead, we expect to see a real battle, which should last until the final bell.