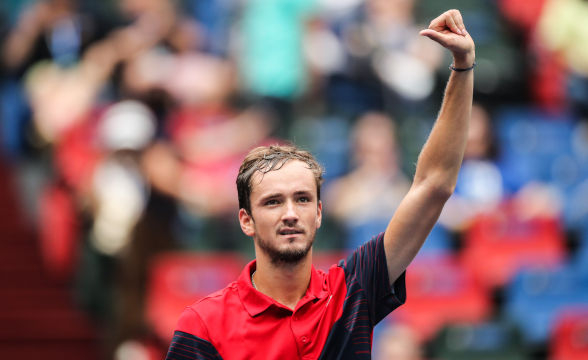 The last year’s Miami Open champion Hubert Hurkacz is locking horns with the #1 favorite to win the 2022 tournament, Daniil Medvedev. Two meet on Thursday in the quarterfinal stage, which is going to be their fourth clash ever. The previous three all happened last year, with Medvedev winning two of those.

What’s interesting is that none of the Medvedev vs Hurkacz matches saw a player win in straight sets. Are we going to see the same happening again? Betting odds suggest otherwise. With a -400 price, Medvedev is expected to have a field day at Hard Rock Stadium.

The main reason is that he’s ranked higher in the ATP Rankings than his opponent who is in the #10 position. Medvedev is sitting in the #2 place, but if he wins on Thursday, he will secure just enough points to leapfrog Djokovic and become the world no.1.

A Must-Win Match for Daniil Medvedev

If Medvedev beats Hurkacz, he will get to the ATP no.1 spot for the second time in his career. The first time he got there was in February, but it lasted only for a couple of weeks. It’s because Medvedev dropped a lot of ranking points by exiting the Indian Wells too early. As a reminder, he lost to Gael Monfils in his second match of the tournament.

He failed in the first part of the Sunshine Double, can he do better in second? Oddsmakers sure think so. In fact, even before the start of the 2022 Miami Open, Medvedev was seen as the #1 title favorite. So far, he’s been meeting the expectations, winning all three matches in straight sets. Each of those Medvedev finished in under 90 minutes.

The highest-ranked Polish player won the last year’s Miami Open despite coming to Florida as a huge underdog. At the time, some online sportsbooks were giving odds in the ballpark of +3500 on Hurkacz winning the title.

This time, it’s a bit different, although he still isn’t thought of as a serious candidate. One of the reasons for that is that he’s facing the #1 seed in the quarterfinal. Another reason is that Hurkacz hasn’t been too impressive this year.

The 25-year-old is 13-5 since the start of the year, with most of his wins happening against players from outside ATP Top 30. In fact, the only exception is Jannik Sinner, ATP no. 11 whom Hurkacz defeated at ATP Dubai in February.

Medvedev will win this match and he’s going to do it in straight sets. Sure, Hurkacz is a fine player, but he just doesn’t seem capable of doing much against the future no.1.

Pick: Daniil Medvedev to win in straight sets; under 22 sets