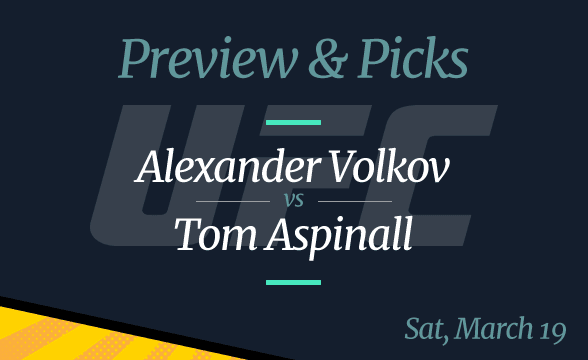 The UFC is coming to London this weekend. The O2 Arena in the capital of the United Kingdom will serve as the venue for the UFC Fight Night 204 event, also known as UFC on ESPN+ 62. The headliner is the heavyweight bout between former Bellator champ Alexander Volkov and the highest-ranked UK fighter Tom Aspinall.

Odds taken from FanDuel on March 15.

Volkov Is Dreaming of the UFC Title

Alexander Volkov is 34-9 in his professional career, with an 8-3 record in the UFC. His most recent fight happened last October when he defeated Marcin Tybura by unanimous decision. Thanks to his pretty decent record in this promotion, he’s now ranked sixth in the heavyweight division.

If he wins on Saturday, we could see him getting a chance to compete for the championship belt by the end of the year. The trouble is that online sportsbooks think he’s not going to win. The reason for this might lie in the fact that his opponent tends to do well against fighters like Volkov.

The thing is that the 6’7 Russian is a standup striker with an 80-inch reach who usually finishes his fights by knockout. In fact, 22 of Volkov’s 34 career wins happened this way. The bad news for him is that Aspinall is superb when fighting against strikers.

Is Tom Aspinall the Next Big Thing in the UFC?

Tom Aspinall is 11-2 in his professional career, with a 100% record in the UFC. Although his career in the elite MMA promotion started less than two years ago, the UK fighter has already shown the world he is top class. In his four UFC fights, Aspinall defeated Jake Collier, Alan Baudot, Andrey Arlovski, and Sergey Spivak.

All of those fights finished before the final bell, with Aspinall knocking out three of those guys. Arlovski was the only one he didn’t knock out – Aspinall beat him by submission.

At a 6’5 height and a 78-inch reach, Aspinall looks capable of keeping Volkov at bay. Another reason why he might do well is that he’s got plenty of experience with boxing. In fact, he’s even fought one professional boxing fight in his career. It happened in 2017 when he KO-ed Hungarian pugilist Tamas Bajzath in Round 1.

For Aspinall, this is the toughest fight so far. He sure has the motivation, as well as the skills to pull it off. Further, the Liverpool-born fighter will also have the crowd on his side, with a huge majority of 20,000 fans at the O2 Arena rooting for him.