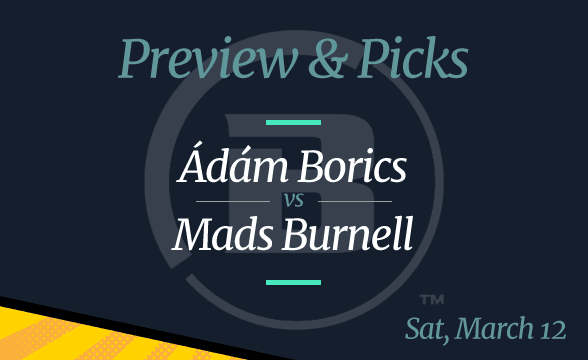 Two weeks after the previous event, Bellator MMA is back! Family Arena in St. Louis, Missouri is the place where Bellator 276 will take place on Saturday, March 12. The headliner fight is a featherweight bout between Mads Burnell and Adam Borics.

Borics is 7-1 in Bellator, the promotion in which he’s been fighting since 2017. For his opponent, this is going to be only his fourth Bellator fight – Burnell won the previous three.

If you take a look at betting odds, you’ll see that he’s expected to win again.

Adam Borics is 17-1 in his professional career which started back in 2014. His MMA journey started in a promotion called PMMAL, from which he moved to FFC, before finally becoming a Bellator MMA fighter in 2017.

In this promotion, he won seven fights, while losing one. His only defeat happened at Bellator 238 when Darrion Caldwell beat him by submission in Round 1. Since then, he won three fights, each by decision. He defeated Mike Hamel, Erick Sanchez, and Jeremy Kennedy.

As a result, Borics is now sitting in the shared second spot in the Bellator Men’s Featherweight Rankings. The man with whom he’s sharing the #2 position is his next opponent, Mads Burnell.

Mads Burnell might not have an as impressive record as Borics. He is 16-3 in his professional career. However, the reason behind this is that he used to fight in the UFC in the past. From 2017 to 2018, he fought at three UFC Fight Night events, winning one and losing two.

After his UFC adventure finished, Burnell moved to Cage Warriors, where he won all four fights, getting ahold of the CWFC Featherweight title.

Then in 2020, he signed a contract with Bellator MMA. So far, he’s fought three bouts in this promotion, winning each. We saw him defeat Darko Banovic (by KO), Saul Rogers (submission), and Emmanuel Sanchez (decision).

It’s an impressive streak, no doubt about that, but the highest-ranked opponent he’s won against is Sanchez who’s sitting in the #6 position. This Saturday, he’s facing a much tougher challenge, meaning that we could see him fail.