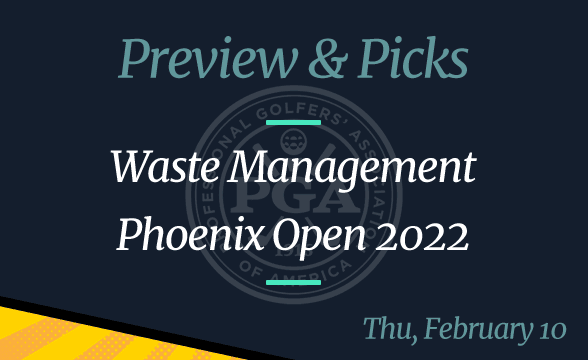 The Phoenix Open is one of the most prestigious events in the golf universe, being staged every single year since 1932. Add to that the fact that the prize fund is $8.2 million, and you’ll understand why so many elite players will take part in the tournament.

Six of the top 10 ranked golfers are going to TPC Scottsdale-Stadium Course in Arizona to take part in the event. This includes the #1 player in the 2022 Official World Golf Rankings, Jon Rahm. Patrick Cantlay is also there, as well as Viktor Hovland, and many others.

On top of that, the last year’s winner Brooks Koepka is also returning to Arizona. Still, oddsmakers don’t think he stands much of a chance to retain the title. You can see who the betting favorites are in the section below.

*Odds taken from FanDuel on February 8.

Can Koepka Defend His Title?

Three years ago, Brooks Koepka was the highest-ranked golfer in the world. He occupied the #1 spot for a total of 47 weeks. However, in recent times, the 31-year-old American hasn’t been playing at his best. Last month, Koepka missed the cut at the 2022 Farmers Insurance Open. As if that wasn’t enough, he also failed to do much at the Tournament of Champions, ending in the 28th position.

In fact, one of his best outings within the last 12 months was the one at the 2021 Phoenix Open. That’s when we saw him win by a stroke from Lee Kyoung-Hoon and Xander Schauffele. It was his second win in Arizona and winning the tournament for the third time would bring him back in the spotlight.

There’s no doubt that Koepka still has the skillset to win big tournaments. The trouble is that so do his main rivals. And at the 2022 Waste Management Phoenix, there’s plenty of them.

The world #1 Jon Rahm is still without a win at a PGA Tour event this season. Is it time for the Spaniard to change that? Oddsmakers surely think so. They’ve made him the main favorite at the 2022 Phoenix Open, with the odds of +750. He’s the only player whose odds are shorter than +1000.

If he wins this week, it’s going to be his first-ever win in Arizona. Although Rahm is without a win at the Phoenix Open, he doesn’t seem to mind playing there. So far, he’s competed in six events, in three of which, he finished in the top 10.

That’s probably where he will end once again, but will he actually win the title? Well, the odds on him are short for a reason. Despite not being in top shape, he remains one of the best golfers of his generation.

Speaking of good form, we need to think about Victor Hovland. The Norwegian has been fantastic since the start of the year, winning the Dubai Desert Classic recently. It wouldn’t be surprising if he did the same in Arizona.

Still, if we had to pick only one, Rahm would be the obvious choice.